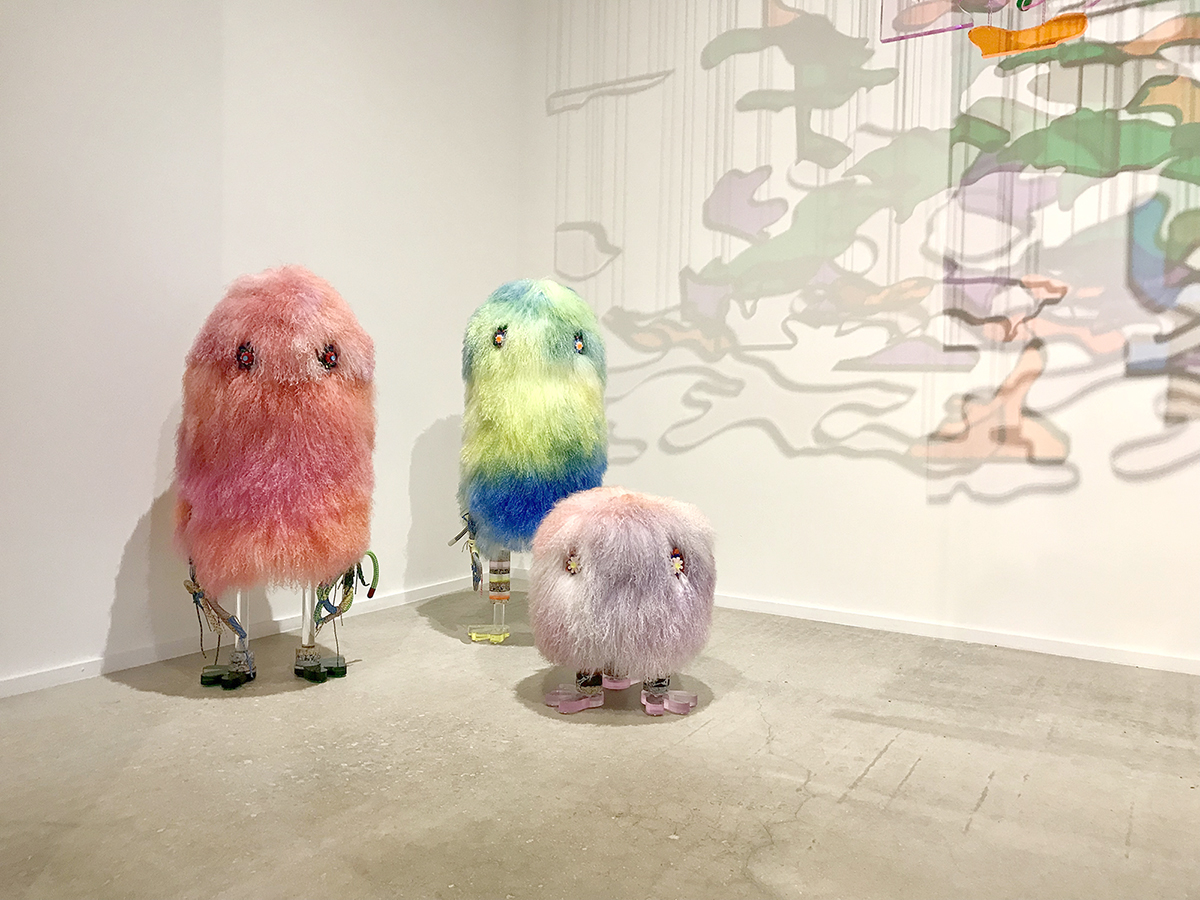 Gabriela Noelle welcomes us into an alluring and whimsical realm with the exhibition Imaginary Friends. Inspired by the subconscious of a child’s creative and inventive mind, the exhibit reveals the imagination to posses more power than concepts of reality instilled and defined in adulthood. The exhibition not only venerates youth, it celebrates the contrast between adolescence and adulthood, Earth and Man, the natural and the synthetic.

The artist, who describes herself as initially skeptical of the dependent relationship between humans and technology, has chosen to embrace the “intention of progress, [hopeful] for a day of true symbiosis and positive evolution.” Through Gabriela Noelle’s lens, we encounter a creative universe inhabited by vividly colored three-dimensional works including clusters of flowers, shimmering butterflies and dragonflies, and fantastical creatures borne of her preferred medium of Lucite. The material is paired with mirror in a collection of works, creating a broad spectrum of scintillating reflections and shadows which form essential and equally important parts of each work.

The exhibit propels themes of camouflage, chemical synthesis and transitional objects. In nature, mimetic camouflage enables prey to use protective coloration to achieve a resemblance to other objects and organisms, thereby concealing the creature in order to trick or disguise. In its philosophical practice, mimetic theory – as originated by the French polymath René Girard – explores the “observable tendency of human beings to subconsciously imitate others.”

“The series Cubes in Flatland mimics the intrinsic function of camouflage – to conceal with its bright colors – yet plays with obscuration through transparency, dimension and scale. The saturated colors in Cubes in Flatland also refer to a future where defense might be necessary, nature is mimicked, and ‘natural’ colors are no longer present; a world overly-saturated because it is man-made and artificial,” describes the artist. Created of paracord, utilized in survival equipment as well as in children’s arts and crafts, and Lucite, which gained popularity during World War II, and continues to be used in military applications, Noelle channels the dichotomy of these materials and the drastic change achieved through the manipulation of color.

Gabriela Noelle’s chemical synthesis is a hybridization of photosynthesis and the concept of synthetic. The theme originates with her series Fossils. Oversized acrylic flower sculptures are combined with repurposed painted concrete rubble from demolished buildings, allowing the artist to pay tribute to the past, while looking to the future. In the artist’s view: “From these concrete rocks, a flower emerges, synthetic at that, because our history is perpetual and our future is blossoming.” The series shifts into acrylic flowers of assorted sizes cemented in bio-fluorescent rocks, displaying the evolution of “an idea that even something man-made and synthetic has the potential to outgrow its creator and be wild. Their colorful shadows suggest that they might possess life – might have potential outside of their original intention – and are trying to communicate in the way of bio-fluorescent animals that glow not for defense but, rather, to attract a mate. Can these synthetic flowers reproduce on their own?” questions Noelle.

Her series Transitional Objects is titled to reference the term introduced by psychoanalyst Donald Winnicott which labels items to which young children develop strong attachments, exploring the idea that our dreams or “make-believe” can manifest in actual, tangible forms. As Gabriela Noelle explains: “Perhaps ‘Imaginary Friends’ reveals an alternate dimension where these creatures exist yet can only be seen when liberated from the conditioning and doubts of adulthood.” The friendly, amorphous beings, observing with wide-eyed innocence, embody the unselfconscious.

Examining and honoring traditions of color exploration and experimental “land art” established by inspiring Contemporary artists Frank Stella, Kenneth Noland, Ugo Rondinone and Robert Smithson, Gabriela Noelle invites us to a study of ontology and perception through a realm of color and distinct visual language in the exploration and participatory visual experience of Imaginary Friends.

Luisa Lignarolo and Sergio Cernuda
Introduction from the Exhibition Catalog 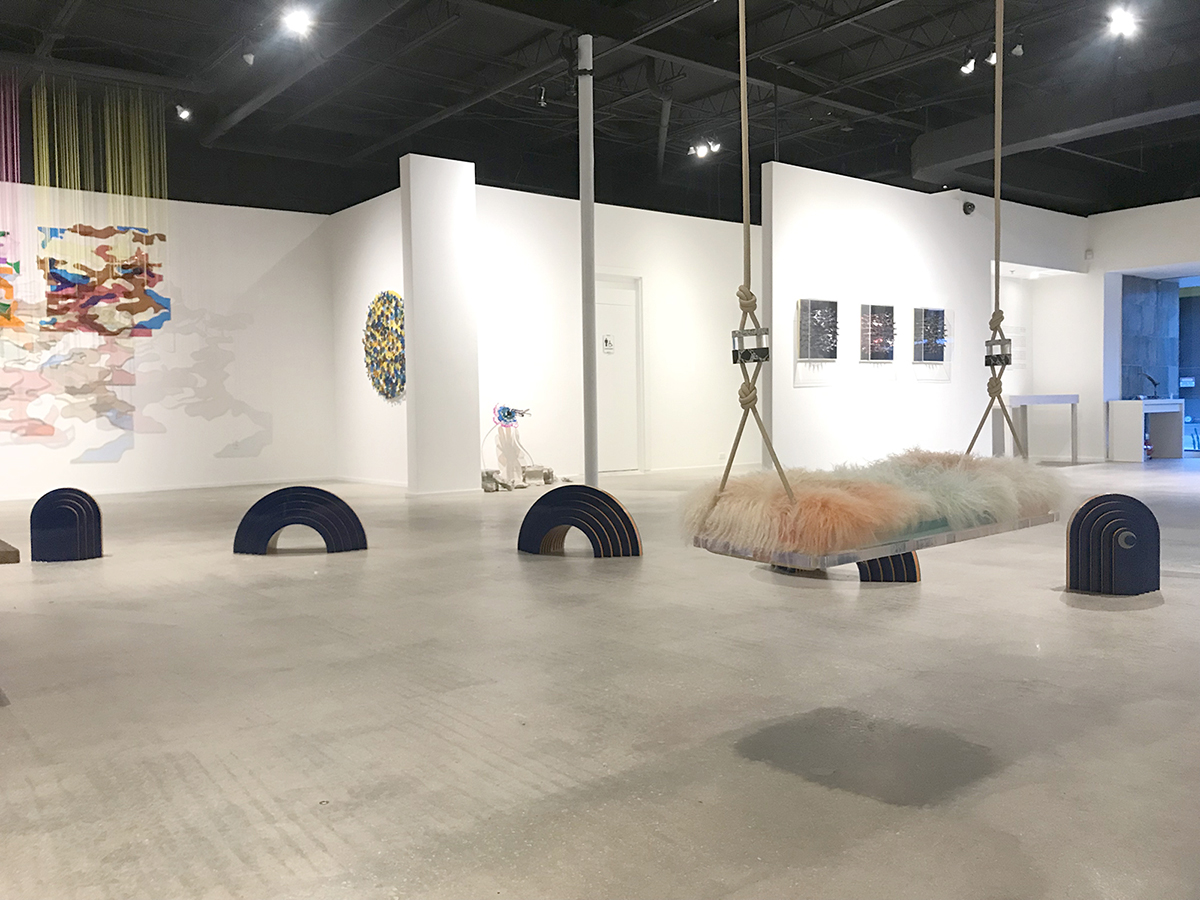 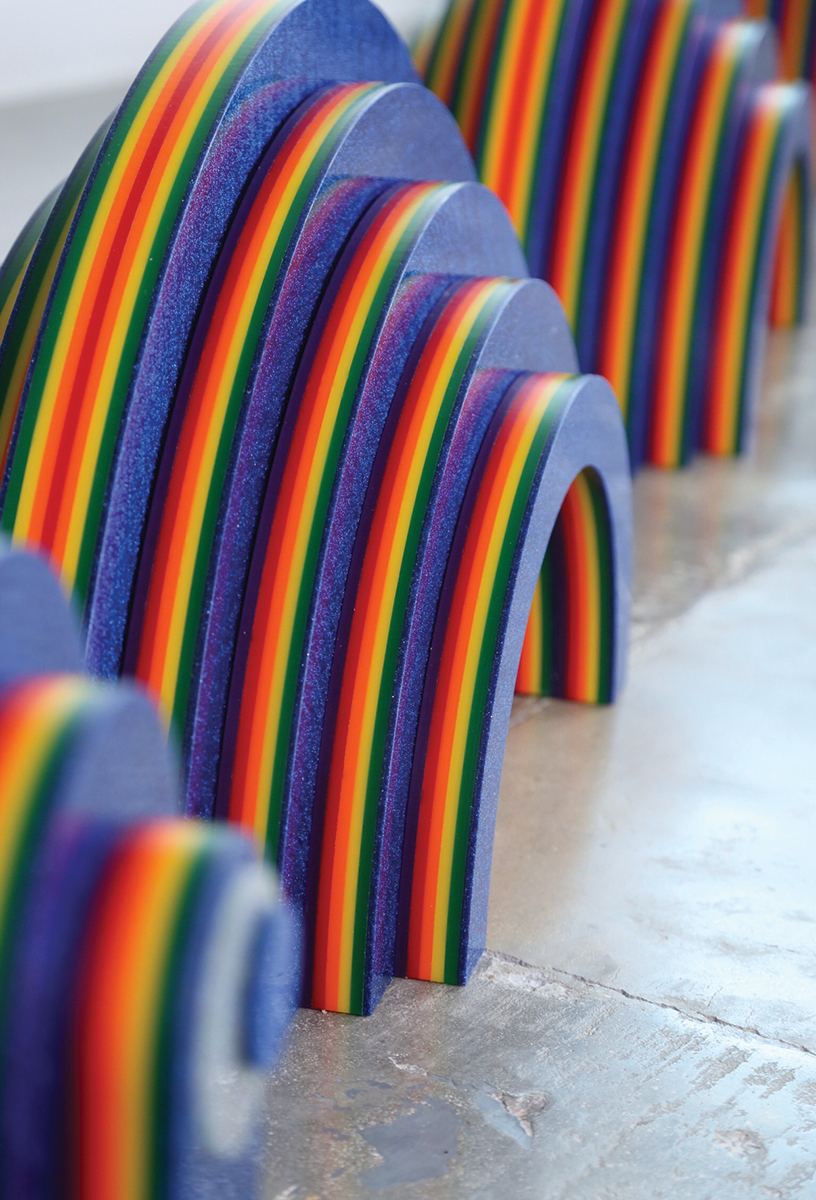 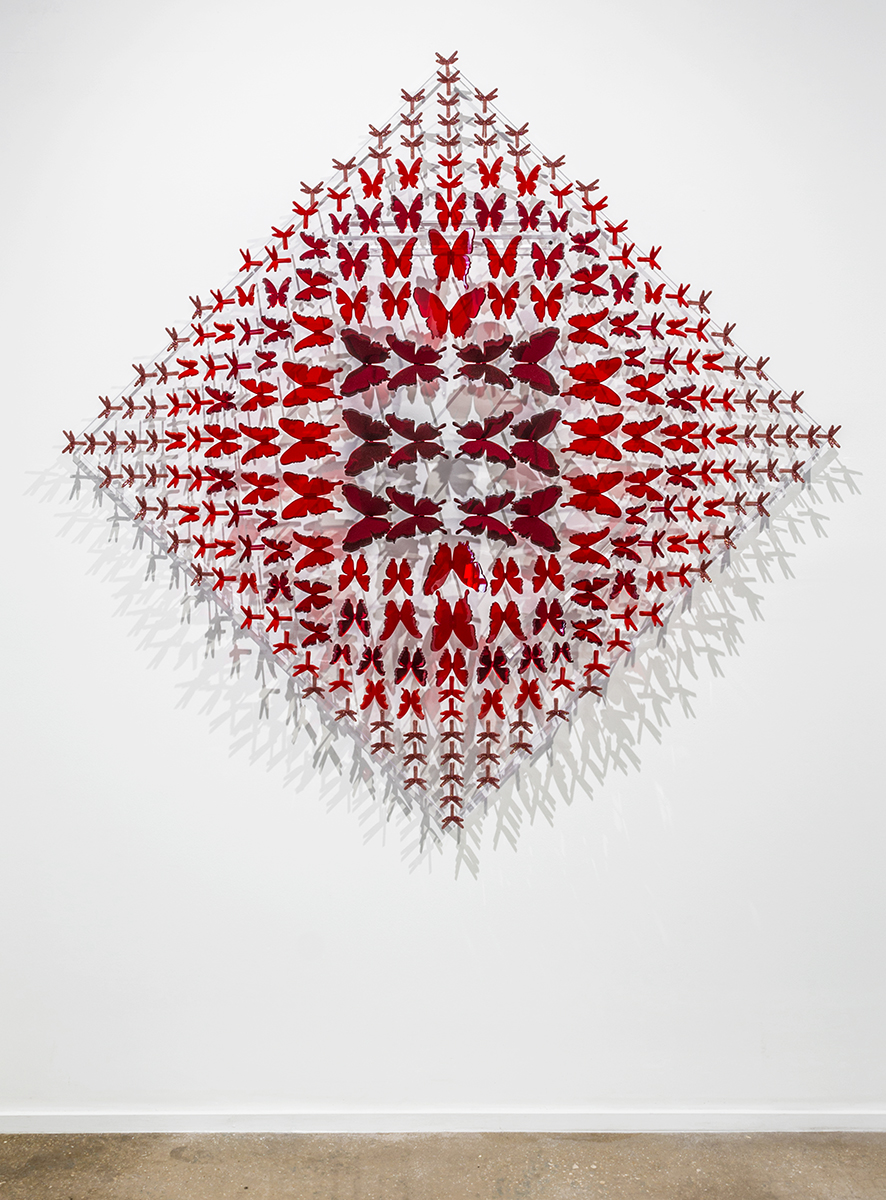 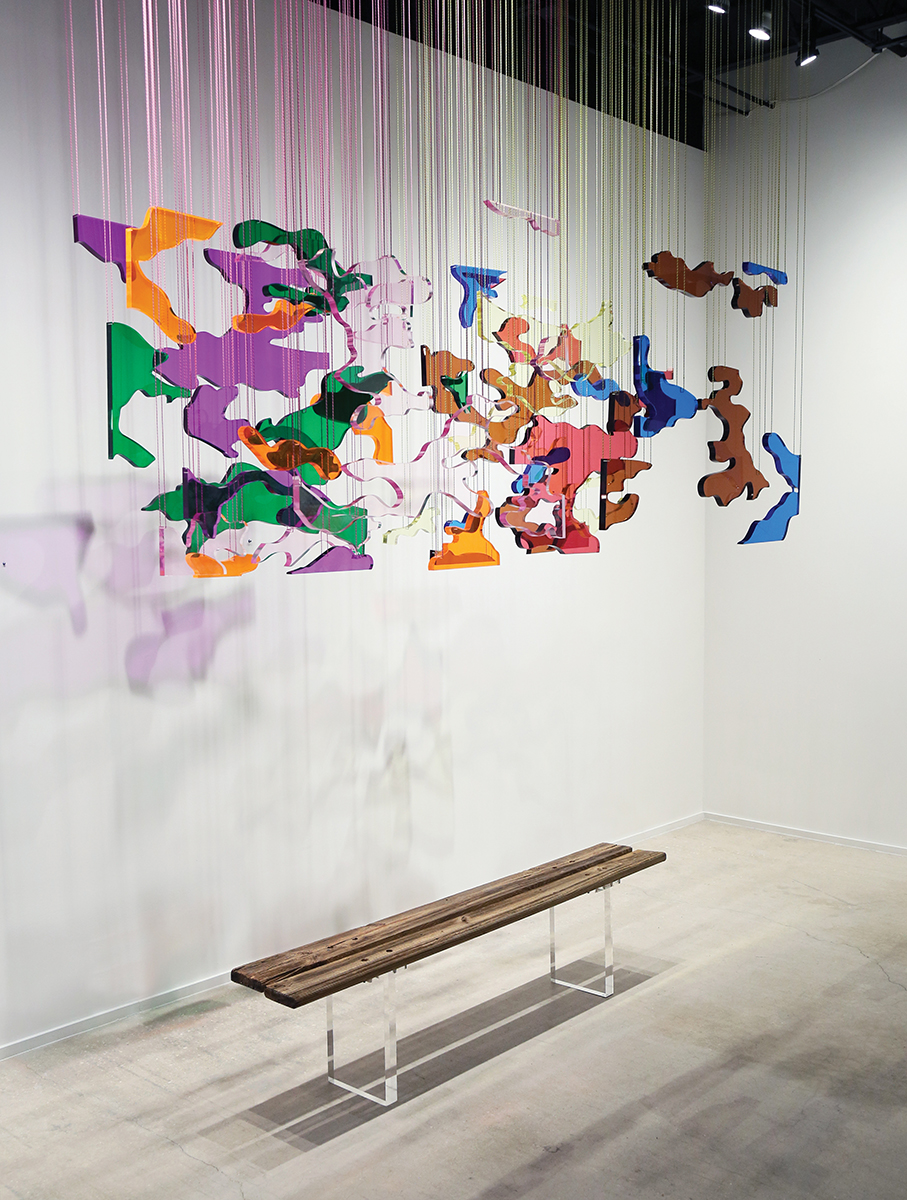 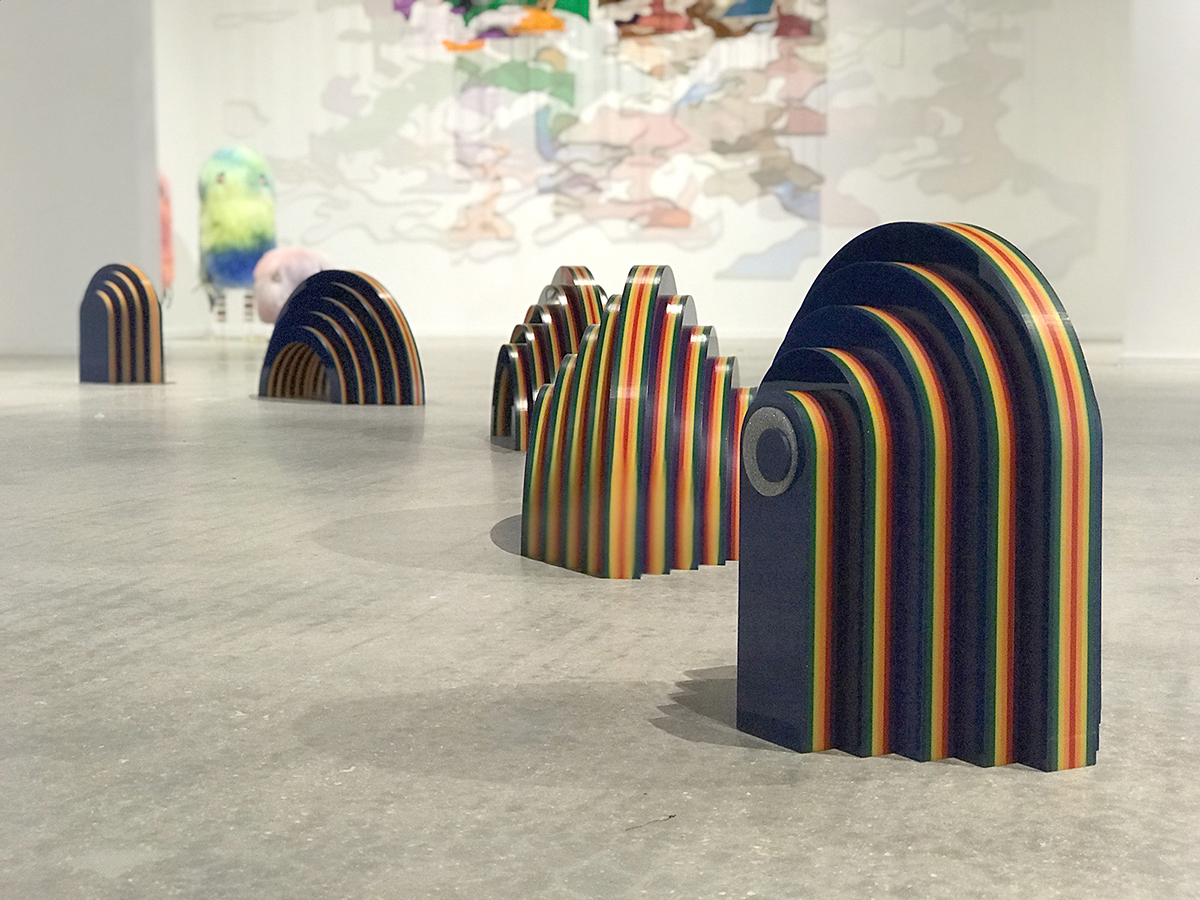