Like many artists of this era, Farny had a background in fine art but found himself earning his bread executing illustrations for various publications. What sets Farny apart from many other artists is the fact that he has shown that as an illustrator he can produce "fine art." His first job came as an apprentice with a lithography firm in Cincinnati. His family had located there in 1859 having moved from Alsace, France. By 1865, Farny had his first illustrations in Harper's Weekly. Determined to strengthen his artistic talents, he went to Europe in 1866 to study at the Dhsseldorf Academy. There he studied under Mih<ly Munk<csy and then in Munich with Wilhelm von Diez. Three years later he was back in Cincinnati resuming his work in illustration. His art appeared on circus posters, illustrations for Guffey's Readers and a variety of other publications. In wasn't until 1881, at the Standing Rock Indian Reservation of the Sioux that he discovered the subject that was to hold his interest until his last days. In the following thirteen years the artist made four more journeys West to gather material for his paintings. In these three-month long periods he traveled through the plains and mountains, and ventured into the South and Northwest portions of the country gaining an intimate knowledge of the landscape and indigenous people of the West. Back in Cincinnati he worked in his studio turning the photographs, sketches, and artifacts from these ventures into his Indian paintings. Much of Farny's art depicts his subject in their natural nomadic setting and not on the reservations that they had been confined to. It is a testament to the skill and imagination of the artist that the paintings have the "freshness" and the look of having been painted on the spot and not a sterile studio setting, where many of them were executed. As well, Farny depicted the life of the Indians as exotic, idyllic, and free of poverty, disease or the malaise and doom that plagued them. He was sympathetic, not overtly Romantic, in his attitude and approach to his subjects. For these reasons, his paintings hold an important amount of anthropological information and tell of a life that has been permanently and irreparably changed. His reputation as a painter has steadily increased and today he is certainly considered a Fine Artist. 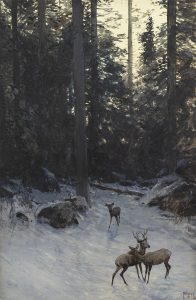