Clark Hulings' tranquil compositions reflect the talent and experience of one of the nation's most respected painters.  Hulings captures his subject with impeccable technique; his vibrant paintings glow with remarkable light, color and texture.

As a young child, Hulings lived in Spain.  His experiences in that colorful country continue to influence his work, particularly his choice of subject matter. Hulings has traveled in Egypt, Morocco and Mexico, as well as throughout Europe. His preference for painting the rustic and provincial scenes of everyday life is apparent in his beautiful interpretations of the open-air markets, farms and countryside. Hulings spends several months a year traveling and painting, always finding beauty in the simple parts of people's lives.

Hulings studied with Sigismund Ivanowski and with George Bridgmond at the Art Students League in New York. During this time he began painting delicate still lifes and found a steady demand for his portraiture.  After a successful career in illustration, Hulings eventually settled in Santa Fe, New Mexico.

In addition to receiving the coveted Prix de West from The National Academy of Western Art in Oklahoma City in 1973, Hulings has also received three silver and two gold medals from subsequent NAWA competitions.  In 1976 he was given a one-person show at the National Cowboy Hall of Fame and was presented with the Hall's Trustees' Gold Medal for his distinguished contribution to art in the U.S.

Nedra Matteucci Galleries began to represent Clark Hulings in 1989 with an exhibition of 40 field sketches.  In 1999 the gallery held an unprecedented one-person show of some thirty-five Hulings paintings.  Since then the gallery has proudly showed the work of this remarkable artist on a permanent basis. 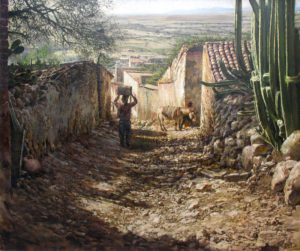